(CNN)On the road toward a return to normalcy, the rapidly climbing number of Covid-19 vaccinations is good news. But a major challenge may lie ahead, a leading health expert says.

Tens of millions of Americans haven’t started their vaccinations yet, National Institutes of Health Director Dr. Francis Collins told CNN on Wednesday, and “a lot of those folks are still not sure that they want to take part in this amazing opportunity to put this virus behind us.”
“We have to really figure out how to get the messages out there so that those who are still undecided get the information they need to see why this is really something they would want to do.” 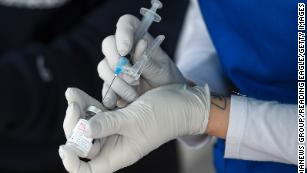 US may soon reach a tipping point on Covid-19 vaccine demand. Here’s why that’s concerning
A report published this week warned the country will likely reach a “tipping point” in the next two to four weeks and vaccine supply could outstrip demand. Parts of the country have already begun to see that pattern. And younger Americans, many of whom recently became eligible for a shot, are less likely than older residents to claim they have or will get vaccinated, a recent poll found.
But experts say the US needs much higher levels of vaccination to control the virus.
“If we’re going to get past this terrible pandemic, it’s going to take most of us being immunized. Otherwise, the virus can just keep going on and on,” Collins said.
So far, roughly 40.5% of the US population has received at least one Covid-19 vaccine dose and about 26.4% is fully vaccinated, according to data from the Centers for Disease Control and Prevention.
Vaccine advisers at the CDC plan to meet Friday to discuss bringing Johnson & Johnson’s single-dose vaccine back into use. It was put on hold to investigate a potential link to serious blood clots. 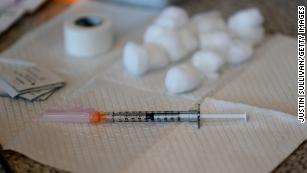 One dose of Covid-19 vaccine thrown out for every 850 administered, CDC data shows
Federal, state and local efforts are ongoing to push up the numbers of those vaccinated.
“I think our effort shifts, and it shifts to younger people who just don’t think about Covid quite as much,” Andy Slavitt, the White House senior adviser for Covid-19 response, told CNN.
In Maryland, Gov. Larry Hogan announced a new “all-hands-on-deck” effort to ensure every resident who wants a shot can get one as quickly as possible, including seniors and college students.
“We truly are close to that light at the end of the tunnel. Those of you who have not yet been vaccinated, please go get a vaccine as quickly as you can. Do it for yourself, do it for your family, do it for your friends, and do it so that all of us can put this global pandemic behind us,” Hogan said in a statement. 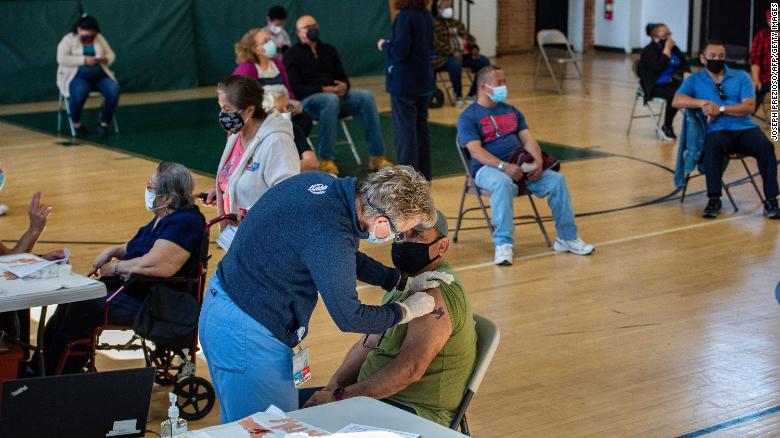 People receive their second dose of the vaccine at a mobile Covid-19 vaccination clinic in Bridgeport, Connecticut, on Tuesday.

Hundreds of Americans die of Covid-19 every day

While many government leaders are highlighting the proximity to ending the pandemic, Covid-19 numbers in the US are still high.
In the past week, a daily average of more than 62,900 Covid-19 infections was reported, according to data from Johns Hopkins University. 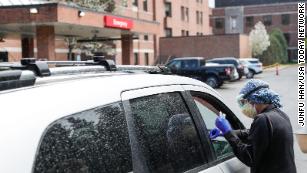 The US is vaccinating millions of Americans daily. But here’s why Covid-19 cases and hospitalizations are up
More than 43,000 Americans are hospitalized with the virus, according to the Department of Health & Human Services.
And hundreds of Americans infected with coronavirus die every day. In the past week alone, the US reported more than 4,900 Covid-19 deaths.
In Washington state, Covid-19 cases are increasing in most counties and hospitalizations are up, with a sharp increase in the number of young adults who are hospitalized, said Dr. Umair Shah, the state’s secretary of health.
And most counties have also detected variants, Shah said.
“Good news (is) that two-thirds of people 65+ are fully vaccinated and more than half of people 50+ have had one #COVID19 #Vaccine dose,” Shah said on Twitter. “Bad news is that as close as we are to turning the corner, we are beginning to see a 4th wave and need people to hang on a bit longer.”
Variants also helped fuel a violent surge of cases in Michigan and officials say that the faster the country gets more shots into arms, the more we lower the chances of dangerous strains fueling further spikes.

Two variants that are closely related and first identified in California seem to replicate better in the noses of infected people, which could explain why they spread faster than the original virus, researchers reported Thursday.
The team led by Dr. Charles Chiu at the University of California, San Francisco did in-depth sequencing of more than 2,000 samples from people who tested positive for coronavirus across California. They found the B.1.427/B.1.429 variants increased from no samples in September to half of all samples taken in January.
Nose swab examinations showed there was twice as much virus in samples from people infected with the variants compared to those with the older strains.
Better genomic sequencing is needed to stay on top of these variants, the team wrote.
The two variants aren’t as transmissible as the B.1.1.7 variant first seen in Britain — which is now the most common variant found in the United States — the team reported in the journal Cell.

Covid-19 survivors, even those who had a mild form of the disease, appear to be at a much greater risk of death and need more medical care in the six months after their diagnosis, according to a study published Thursday in Nature.
In what the authors say is the largest study yet of the long-term impacts of Covid-19, researchers looked at the records of more than 73,000 patients at the Veterans Health Administration who had had Covid-19 but weren’t hospitalized with it, examining the records over a six-month period after their diagnoses.
The researchers found that patients who had Covid-19 had a 60% higher risk of death between one and six months after getting sick than those who had not had Covid-19. They also had a 20% greater chance of needing more medical care over the six months.
Respiratory problems were the most common complaint for those patients, but they also had a higher number of diagnoses for nervous system problems, headaches, trouble sleeping, anxiety, fear, trauma, stress disorders, stomach problems and metabolic disorders such as diabetes and obesity.
They also had more treatment for low energy and fatigue.
The researchers also looked at Covid-19 patients who had been hospitalized and saw similar results. The sickest patients seemed to have more long-term complications.

A new study highlights the importance of vaccinations 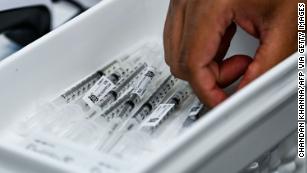 Only 2 ‘breakthrough’ infections among hundreds of fully vaccinated people, new study finds
The researchers found that variants with several differences from the original virus caused those breakthrough infections.
“We have characterized bona fide examples of vaccine breakthrough manifesting as clinical symptoms,” they wrote. “These observations in no way undermine the importance of the urgent efforts being taken at the federal and state levels to vaccinate the U.S. population. They also lend support to efforts to advance a new vaccine booster (as well as a pan-coronavirus vaccine) to provide increased protection against variants.”
Another study that looked at infections in nursing homes in Chicago found that most fully vaccinated residents were not infected with the virus even after someone in the same facility tested positive.
Among the nearly 8,000 residents and nearly 7,000 staff that received two doses since December, there were only 22 breakthrough infections among the fully vaccinated, according to the CDC’s Morbidity and Mortality Weekly Report published Wednesday.
Of those breakthrough cases, two-thirds were asymptomatic. Two residents were hospitalized and one of those residents died, the CDC said. The person who died had three underlying conditions, the agency added.

Kenya imposes new lockdown – What are the restrictions?

Christina Maxouris - May 10, 2021
Elon Musk’s SpaceX Starlink Arrives Nigeria, Meets NCC for Permit. SpaceX has been in discussion with Nigerian Communications Commission (NCC) virtually over the past several months...

Christina Maxouris - May 6, 2021
Young Cameroonian inventor, Awa Blaise Chi is once more in the spotlight for his wit and creations.After several months of hard work, he has...

Christina Maxouris - May 1, 2021
Bochum Samuel Bache, Founder / Executive Director at Youth Advocates for Peace and Community Empowerment Cameroon "YAPCEC" nominated by the commonwealth to run as...

16-year-old Nigerian Amanda Amaeshi celebrated as the 2020 recipient of the Glasgow Times young...

Christina Maxouris - April 29, 2021
Africa's technology ecosystems have experienced "incredible growth" as they have rapidly expanded in recent years, with 618 active tech hubs providing "the backbone of...
Subscribe to Newsletter
Get the latest news, business tips, market analysis, entrepreneurial articles directly from our experts before they are published on Connek24. Be the first to know.

Connek24 is an African magazine and inspirational platform which tells the stories of African businesses before anyone starts hearing of them. Motivates and inspires the next generation of the continents' change makers, connecting them to opportunities

Subscribe to Our Newsletter
Stay Updated!
Learn Awesome Quick Tactics to convert more visitors of your website to subscribers and clients.